The Irish Maker scene is thriving and Dublin Maker 2014 took place today on the Physics lawn in Trinity for a day long get together with a huge array of stands showcasing the diversity of home grown maker talent we have in Ireland. The purpose of the event is to entertain, inform and connect the makers, whatever their chosen medium. It’s a highly “hands on” event too, so you get to poke and play with all of it.

Their web site, www.dublinmaker.ie , has a ton of information on who they are so rather than me repeating it head over their for a look.

I know quite a few of the folks involved but I only learned yesterday that this year’s event marks their decision to break away from the O’Reilly Media organized “Maker Faire” organisation as they felt that their aims ( in particular keeping the event free ) didn’t align well any more. I have to say that it was a great decision, the organisation was superb, and the result was a first class maker event.

Some photos should give a flavour of what was there.

Think Potato – an urban gardening group who are working to make hundreds of potato varieties available using urban gardening techniques – each of the potato plants in this shot are growing in a pot made from an up-cycled water cooler bottle, designed to limit water evaporation in limited space gardens, say for example an urban roof top garden. They are all different varieties by the way, including a couple of truly bizarre purple fleshed spuds. Totally cool. 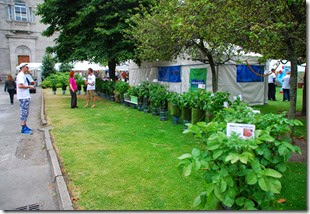 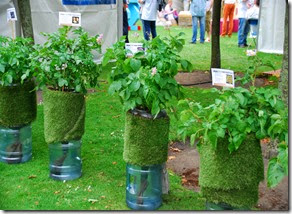 Love this stuff, I sooo want that rabbit, and Donnacha is amazing to watch. 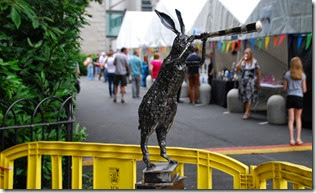 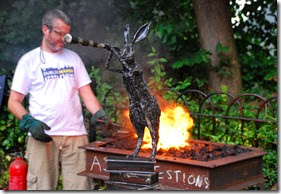 And also, because FIRE! 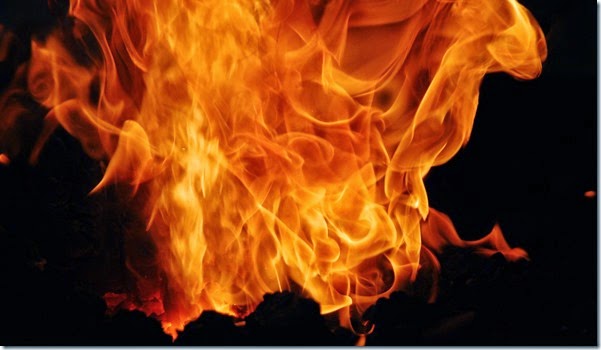 Pneumatic Rocketry. Brilliant session where everyone first makes their cardboard rocket and then launches them in a barrage to see who gets furthest. Brilliant. 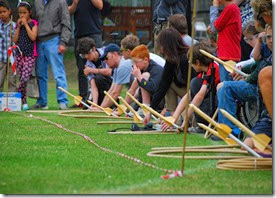 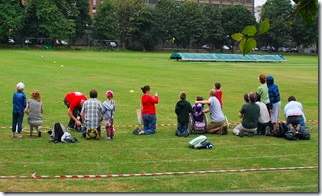 Open ROV – Oh man I also want to build one of these. 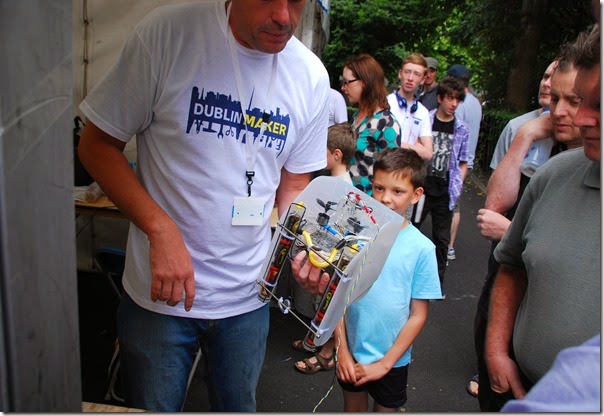 This next little beastie was on the Intel/CTVR stand and is possibly a bit outside the league of the average maker. It might not even be a released product yet, but it’s a 60Mhz-6Ghz board for full Software Defined Radio projects. They had an older version of an open base station mainboard/daughterboard system running that was sniffing out local 4G traffic live on the stand. Really cool to see, and also a great bunch of folks from CTVR who gave me a fantastic intro to what they were doing. Along with plenty of warnings about “you have to bear in mind that broadcasting anywhere outside of 2.4Ghz will probably need a license”. Which is fair enough. But that aside, it’s amazing to think that this gets within spitting distance of X-Band. 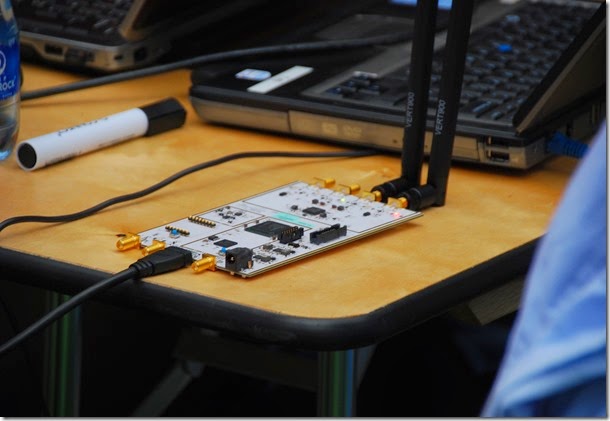 This stand was just epic. This is what I want to be able to do when I grow up. I didn’t catch they guy’s name but this is “just” his hobby – a fully articulated 3D printed dragon. This bit is the head and neck. And when I say fully articulated, I mean it. Eyes move, tongue rolls, eyebrows work, jaw works, head twists and turns, neck has vertebrae that work…. And this is the “naked” version, he’s working on the latex skin at the moment. He also had the beginnings of what looks like a version based around the Night Terror from “How to Train Your Dragon” that you can just about see in the background. 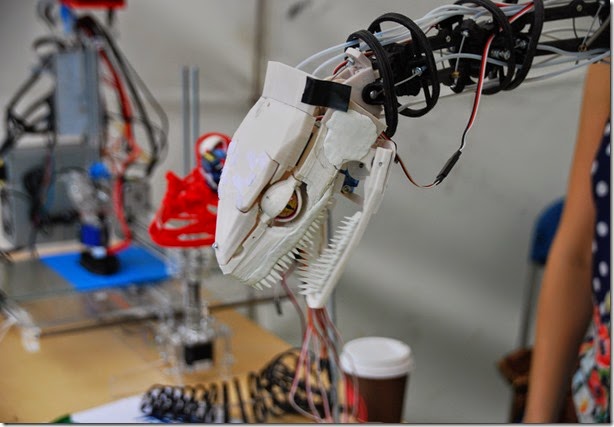 Some slightly out of focus video here: http://www.mobypicture.com/user/helvick/view/17127254 . Damn thing moved too fast for autofocus on my iPhone to track it.

This was just a handful, there were dozens of stands there full of friendly, engaged and thoroughly entertaining makers.

And finally The TOG duck was zipping around all over the place, frequently trailing a horde of very excited kids.And adults as you can see. 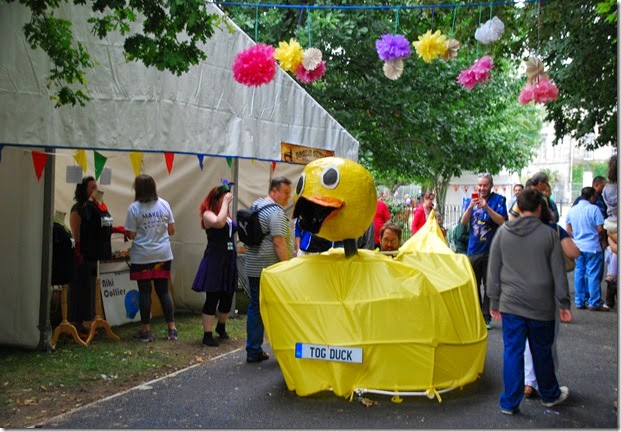 And some more video to show how fast it was – even on grass. https://vine.co/v/M0rAKu2TllX

Brilliant fun. Now all I have to do is sort out my life so I can get a project ready for next years event.

Posted by Joe Mansfield at 17:01 No comments:

I don’t believe in Luck

I’ve been looking for four leafed clover for decades. It’s a thing, I don’t go on expeditions to hunt them down, I just want to find one.

Anyway I was given one as a kid, which I lost with a wallet 25 years ago. My kids found a handful in our garden in 1999 and I gave my one to Audrey somewhere along the line. In any case I never really thought either of those was really “mine” because I hadn’t actually found them. So I’ve been keeping an eye out and looking at clover on and off for a very, very long time without ever finding a four leafed one. 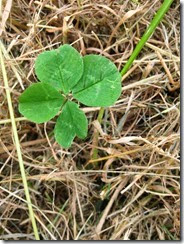 As I was reaching the furthest part of my trip some little homunculus in my head woke up and said “Stop right now and go back, you just saw a four leafed clover”. I’d been strolling along, camera in hand in “keep an eye out for a good photo’ mode not “look at the clover mode’ and I’d already moved on about 10 meters before my conscious brain had caught up with whatever subconscious monitor it was that was keeping a lookout. I actually thought “Nah, there’s no way I noticed a four leafed clover” and almost didn’t turn back but happily I decided what the heck and there it was right where my memory said it would be.

I’m thoroughly amazed at how that sort of observation works. Four leaf mutants are rare but not impossibly rare. About 1 clover in 10,000 has the mutation so if you go into a field and look at every single clover statistics will be your friend. That seems like cheating to me, I wanted to find one along the way, as I said. But picking out a 1:10,000 oddball from a sea of identical green leaves is pretty slick image recognition. Especially when you’re doing it with stereo vision and while moving at 5km/h across a sea of millions of the little buggers. The ability of the human eye/brain to keep that sort of image search program running in the background for decades, and then have it actually pay out, really does amaze me. Quite cool.

Posted by Joe Mansfield at 23:30 No comments:

The Pale, that famously useless 14th defensive ditch that stretched in a loop through the counties neighbouring Dublin, runs south somewhere through Kilcock heading towards Clane as far as I can tell. Some of the remaining parts run in a line between Clane and Kilcock at any rate. My target for today was to go beyond it, and brave the lawlessness on the other side. We’ve come along way apparently because all I met were friendly walkers, cyclists and fisherfolk.

I decided to do an out-and-back route because I was unsure about how long it would take and didn’t want to end up in the middle of nowhere with blistered feet and an expensive taxi call as the only escape route. Kilcock is about 18km from home, taking the most direct route to the Royal Canal at Louisa Bridge in Leixlip. Yesterday I comfortably handled a 25km walk in the other direction, into Phibsboro along the canal and then down into town to get a bus home. I also really wanted to equal my best previous walking distance so I decided to go to the 17th Lock, Ferns Lock, at McLoughlin Bridge which is about 3km west of Kilcock. Total trip ended up at just over 43km door to door. If I’d kept heading out west I’d have comfortably made it to Kinnegad which is quite cool. Might try that next time.

The Royal Canal way is beautifully maintained along the section I covered. It’s a bit rutted from lots of bikes between Louisa Bridge and Maynooth but that’s hardly noticeable as a walker. The rest is well maintained, hard packed gravel surface or closely cut grass. Perfect for walking.

The route took me from Louisa Bridge on the eastern edge of Leixlip, past the new Matt Gough Bridge (impressive but very modern and plain), Dee Bridge and the 13th Lock, Pikes Bridge (the dock at Carton Estate), Mullen Bridge (Tasteful modern bridge beside the original, very nice engineering), Maynooth Dock and the pedestrian walkway over to the train station, Bond Bridge ( again a very nice modern bridge), past the grounds of NUI Maynooth, Jackson’s Bridge (a wonderful construction with four arches, one of which is for pedestrians, Bailey’s Bridge (a very ugly 20th century bridge), North Kildare RFC where I stopped to watch the cricket for a few minutes, Chamber’s Bridge and the 15th Lock (very nice 18th century stonework), Kilcock and it’s fantastic harbour, Shaw’s Bridge in Kilcock ( another excellent modern bridge), the double 16th Lock, Allen Bridge (a dull 20th century functional concrete slab affair), and then finally a km or two right along the Meath/Kildare Border between the canal and the Rye Water until I just barely crossed into Meath at Ferns Lock, the 17th, and McLoughlin’s Bridge.

I think I got there around 12:30PM, almost exactly four hours after I set off. Total distance at that point was 21km. My pace was relatively slow because I was taking pictures along the way out and was always aware that I was going to have to cover every step again.

Heading back I slowed down a bit more and the return trip took me over 5 hours but I stopped three times to rest and give tired muscles a bit of a break. And have a pint or two. This was a Sunday stroll after all.

The weather was perfect for walking, not so good for taking pictures but I got a few more shots of bridges, locks and scenery that should match up with the list above.

The only downside is that yet again I was stupid enough to get sun burned. Never forget to put on sunblock, even if there’s dense cloud cover.

Posted by Joe Mansfield at 22:51 No comments: