I finally got round to walking out to the North Bull Island and getting a look at Dublin Bay from the other side. I parked up by Alfie Byrne Rd which gave me a 10km round trip walk out to the Star of the Sea and back.

The light was pretty poor at the start but got quite interesting as the day progressed. This is the only shot I took in the first hour that was worth keeping, and only because it has some inbound traffic and both the North Bull and Poolbeg Lighthouses in it. 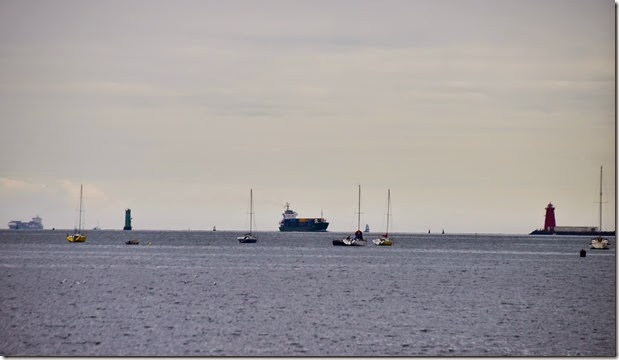 Once I was out on the North Bull itself the light finally started to work. It was still hit and miss, mostly miss but it was fun trying to catch just the right moment as the sun peaked in and out of the clouds. 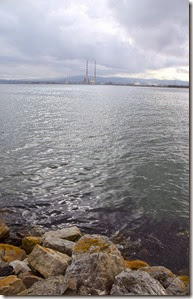 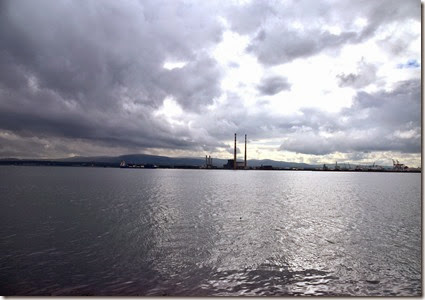 I love this sign. It’s huge, and totally bonkers. It has the correct proportions for a normal street sign but it’s probably 20ft high. Made me feel like I was a hobbit wandering around. There’s a wider shot later that shows it in context but I wanted to get the detail too, it’s very evocative of a time when people actually made things by hand. 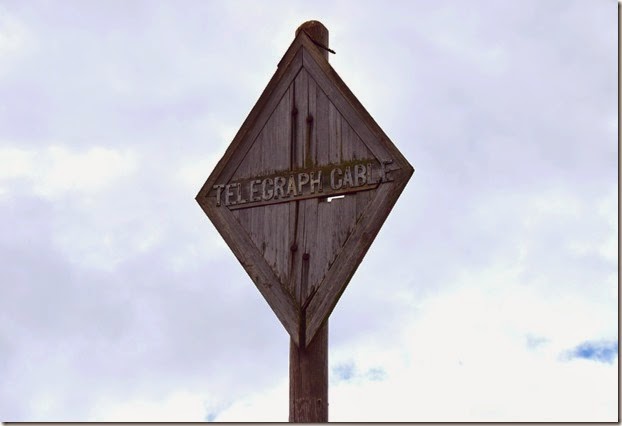 Coming up to the end of the wall the beach stretches off on the north side. I think the rocks are there to help encourage the sand to build up and stabilise but I’m not sure. The island has pretty much built itself up on this side of the wall without any other help since Captain Bligh built it as far as I know. 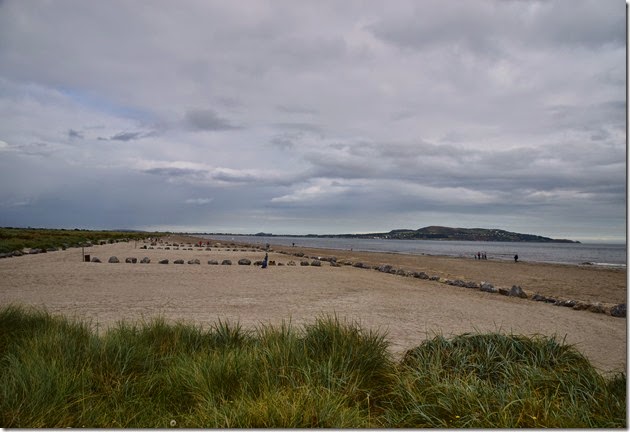 And so to the end of the walk, marked by the Star of the Sea. It’s not the prettiest of monumental things but it’s a fair enough marker I suppose. The North Bull Lighthouse is actually at the end of the wall but the last few hundred metres are covered at higher tides. You can see that it’s pretty shallow along a line out from the walkway. The cormorants seem to quite like it too. 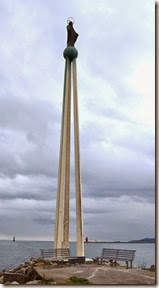 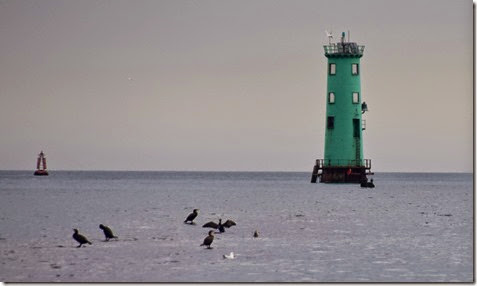 There were some folks sailing out past the Poolbeg Lighthouse. The spinnaker crew on this boat were not having a good day, it took me many minutes to get a picture where it was reasonably well filled. 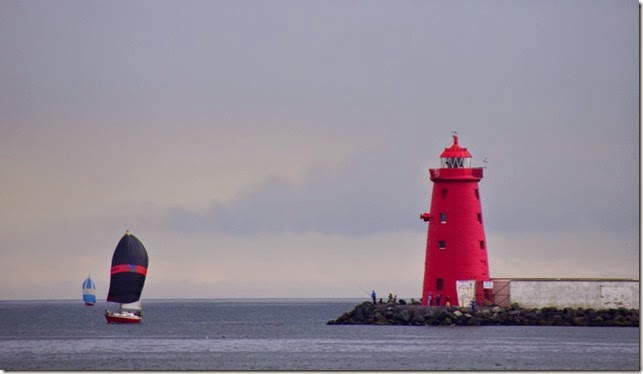 And I got a shot of the North Bank Lighthouse while I was here. I never got a good one from the south side. 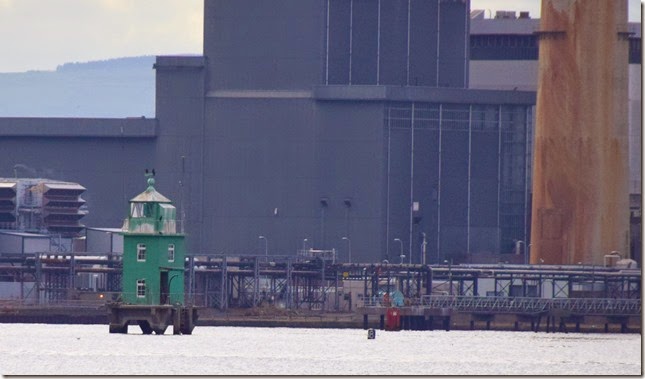 With the Howth Lighthouse in the distance wrapping up this tour of some of the Dublin Bay lighthouses. 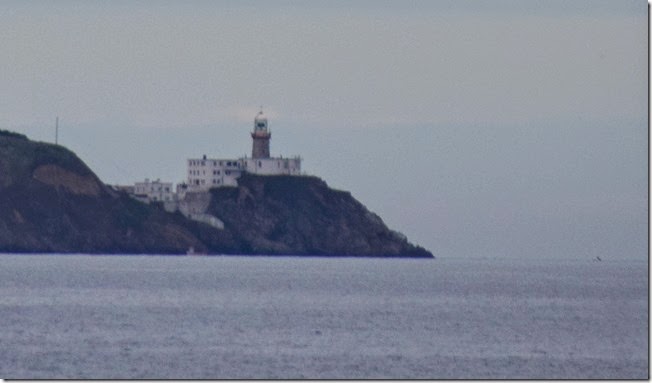 On the way back I was trying to get a better context shot of the Telegraph Cable sign. I need to practice this sort of thing. The HDR option on the camera kind of worked this time but I’m not really a fan of how Nikon implements the effect. It does show just how ginormous the sign is at least. I think the granite post in the second shot is some sort of distance marker. There were two or three and they seem to mark out 1000 foot sections. 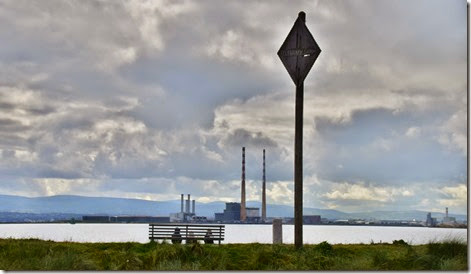 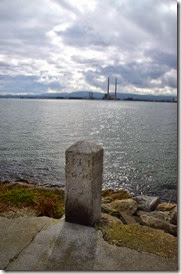 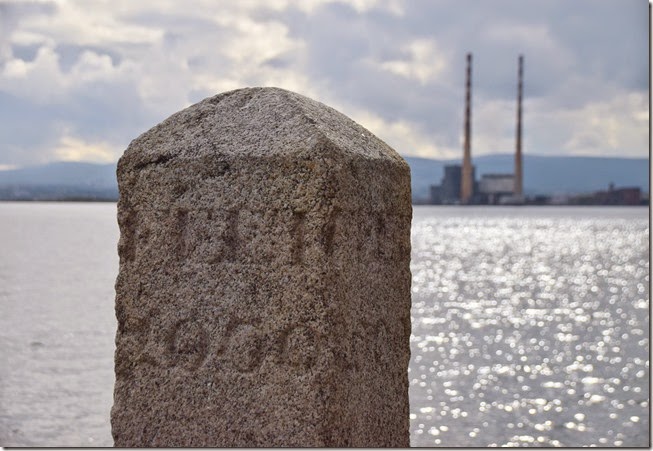 And finally some clouds and the Maui Sculpture on the Clontarf Promenade. 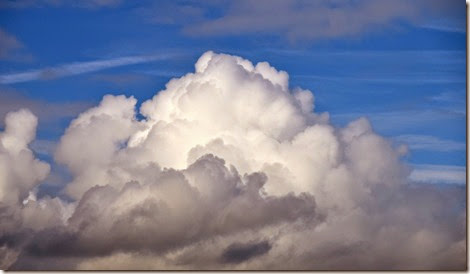 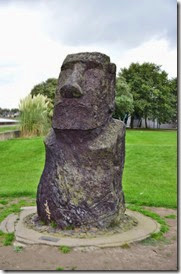 Posted by Joe Mansfield at 18:11 No comments:

You might want to give this a skip if you have any issues with spiders.

I quite like spiders, they keep a lot of annoying and nasty little beasties under control and I’ve never been bitten by one as far as I know. The same can’t be said of wasps though and I have to say that I was quietly cheering on this Garden Spider that I came across in the Liffey Valley car park when I noticed that the packed lunch it was preparing was a wasp.

I think it’s very pretty, in a “Nature, red in tooth and claw” kind of way. And obviously in pretty good health despite living right next to one of the biggest motorway intersections in the country. 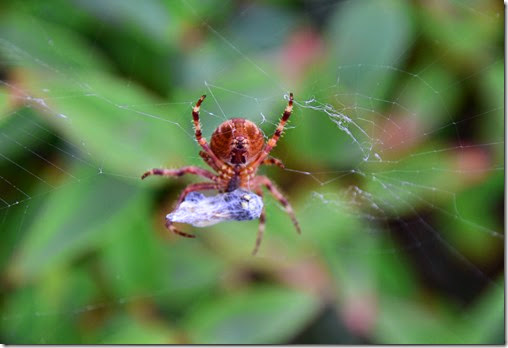 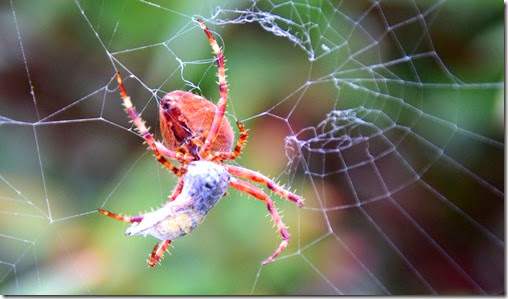 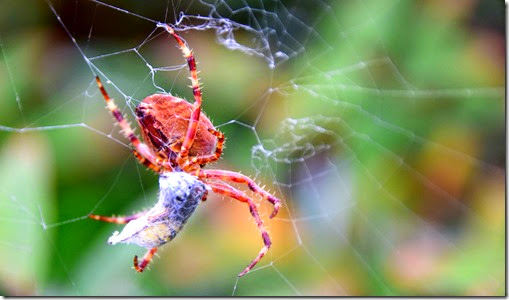 Posted by Joe Mansfield at 16:56 No comments:

So 30 years on and I’m still marching against the 8th Amendment, hopefully I’ll be able to stop soon. There was a good turnout today, 5000 or so by my count. It was enough to fill one side of O’Connell St. as it took off and at the end there was a solid crowd two blocks deep, or maybe even more in front of Leinster house. Great speeches at the end, especially the call to arms by Clare Daly, as she really nailed it for me. The march organizers should be really happy overall, as political marches go the entire set of speakers were really on point, effective and eloquent.

The marchers themselves had prepared well, there were many really effective and clever banners and placards. The other thing that is worth mentioning is that this was a very busy day in the city, great weather and a Hurling final had the streets crowded, and at least from my perspective there was an significant level of support from those just looking on. There were two very sad looking people parked just across from the Garden of Remembrance holding up a placard with some probably heartfelt but still incoherent biblical quote about us all being damned but otherwise the only reactions I saw from onlookers were from people clapping or waving in support.

Roll on 2015 and a referendum to repeal the bloody 8th. 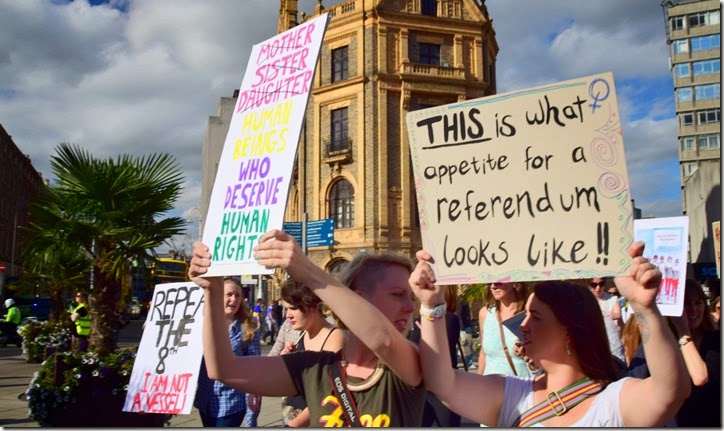 Getting started up by the Garden of Remembrance 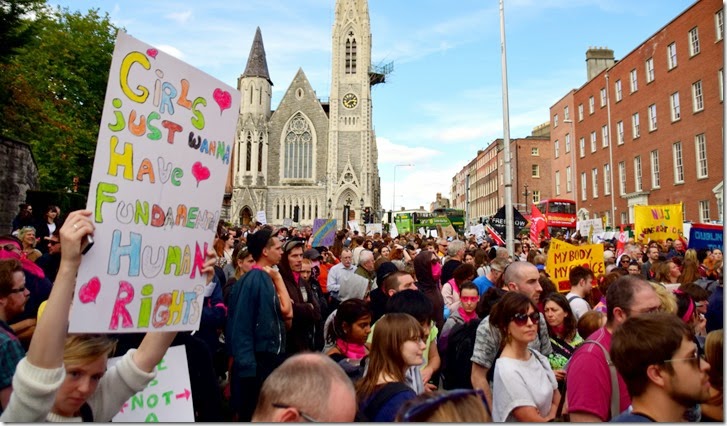 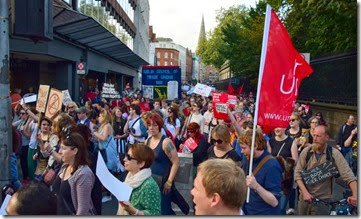 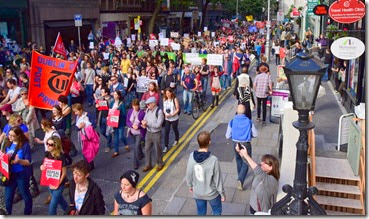 Some of the placards and banners.

There were some politicians taking part. I walked a fair distance right beside Mick Wallace and Clare Daly before I realised who they were. 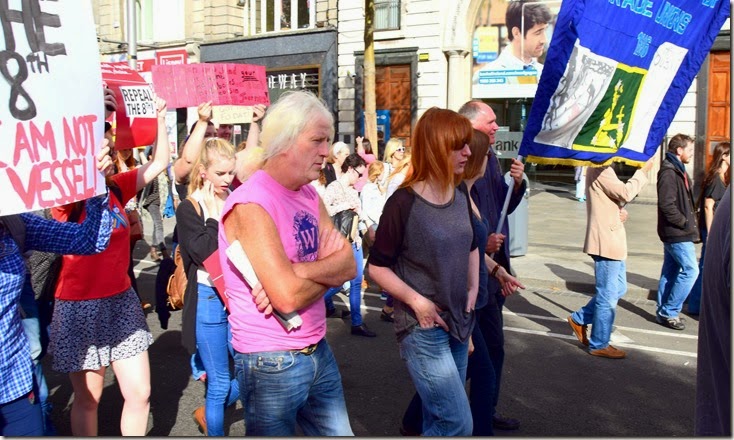 Ruth Coppinger checking out her own words on a ROSA placard. Damn fine quote too. 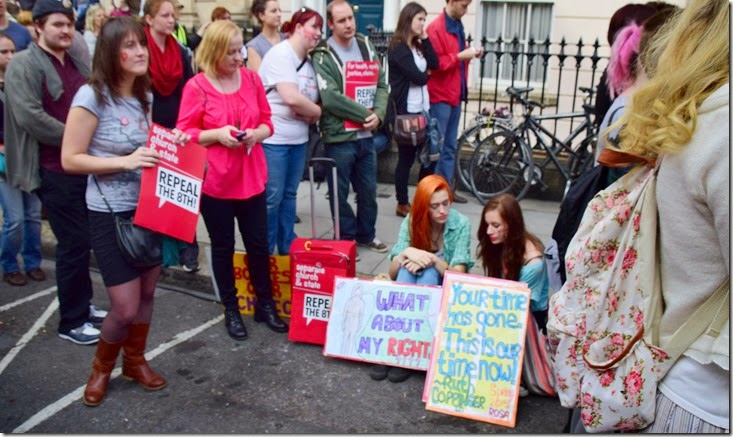 All marches need a Samba band by the way. The DIT Samba band were fantastic and gave the marchers both rhythm and presence. 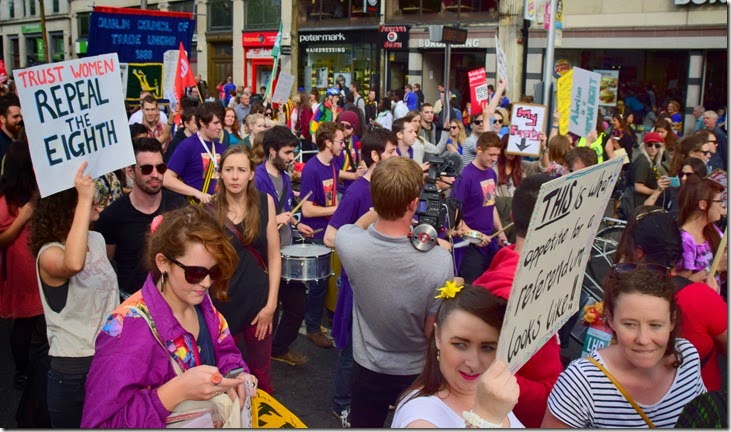 Posted by Joe Mansfield at 18:59 No comments: