Anyone for the last few Marriage Equality Posters then?

I couldn’t hang around long enough to get a picture of this the right way around but you get the picture. 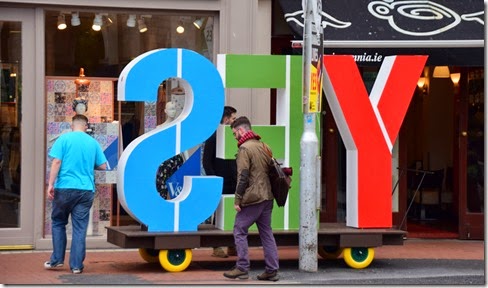 Some clever and creative posters from Cow’s Lane Designer’s Studio and the Gutter Bookshop in Temple Bar. 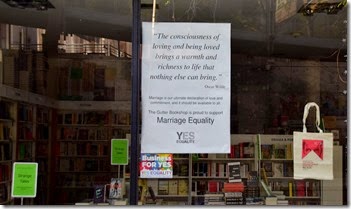 The detail on this piece from The Garden restaurant is lovely. The Brother Hubbard / Little Brother crew were going for the hand crafted look.

The new pop-up office for the Green Party had an interesting take on the Yes sign while the South William gets straight to the point.

Rainbow flags abound like this one in the window of Tropical Popical. The now sadly defunct, but still legendary, Laser Video and DVD Rentals on South Great George’s St gets one final chance to make a mark.

There are thousands of the official Yes campaign stickers but these two from outside the main campaign caught my eye. I like the genuine Irishness of the home made one on the left and the one on the right was one of the few examples of a major international business putting it’s support out there in print so to speak. They were also giving away free ice cream which is always a good thing.

And for some balance. I did actually find a No sticker. For some reason it was on a rubbish bin. 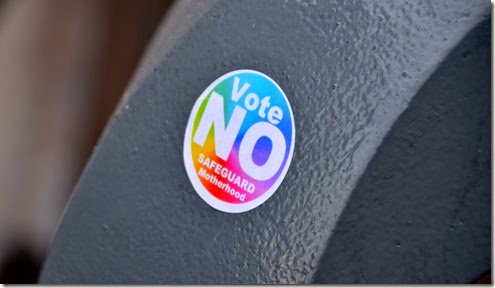 Posted by Joe Mansfield at 21:40 No comments:

The final days of the Marriage Equality Referendum

As we close in on the vote on the Marriage Equality Referendum this Friday the Yes campaign still seems to have significant momentum as far as getting new promotional material out onto the streets. On the way home this evening I came across a couple of people working on the task of outlining the text of this poster onto the window of The Harlequin vintage clothes shop on Castle Market.

It’s a longer cut of the last few lines from Ulysses that close out Molly Bloom’s soliloquy. They made an interesting change to the original text which is obvious when you think about it and really makes this the best piece of Yes campaign material that I’ve seen. Superb. 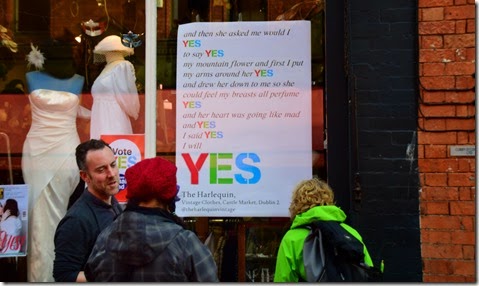 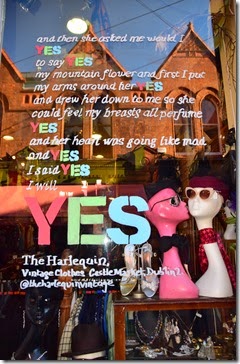 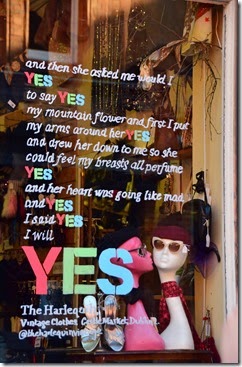 That said Maser’s refresh of his classic ‘You are Alive* * Avail of this “once in a lifetime” opportunity’ mural on the corner of Grantham Street and Camden Street Lower, now dedicated to Una Mullally, is a close second. 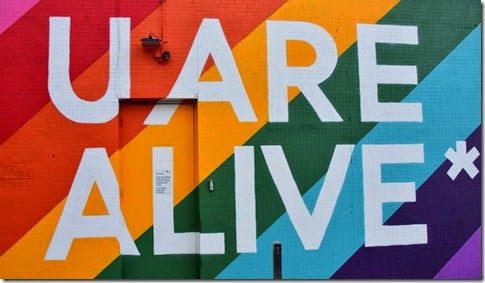 Busyfeet & Coco Cafe decided it was a good time to refresh their mural wall. Also excellent. 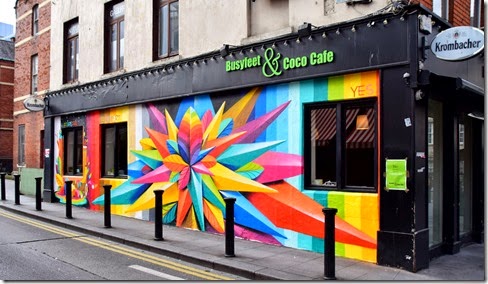 There have been a few other new posters – these four, each of which is about double A0 in size, have appeared in at least three different locations around the city.

The various window decorations continue to spread unabated. I still haven’t seen a single No counter example. I know some in the No camp think these are being forced upon businesses, but it’s pretty clear that some significant effort has gone into the majority of these. No doubt some businesses are feeling pressured but if you aren’t comfortable saying know, maybe you should try a bit of introspection.

Fine Gael have put up a final round of posters with a new, and very positive poster. Yes Equality are closing out the campaign with a set of very nicely put together posters featuring real people as opposed to the typical depthless stock photo choices of the type that backfired on the Mothers and Fathers Matters group with one of their original posters. 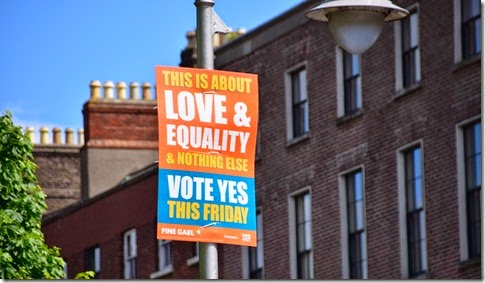 The smaller political groups have also been making a pretty good effort. I applaud the directness of Socialist Worker on this one in particular.

And another large banner. This is the third or fourth that I’ve seen at this scale. 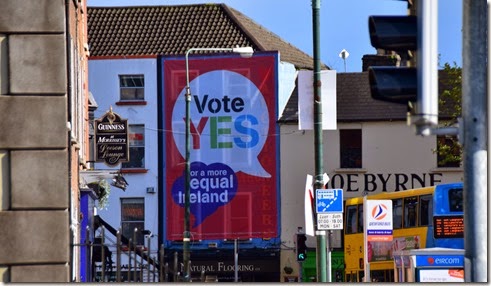 On the street art front, these Father Ted wheat paste slap posters appeared over the past few days  The first three are in and around Dame Lane / South Great George’s Street / Fade Street area, the last one is just off Abbey Street near the Jervis Center. 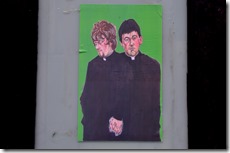 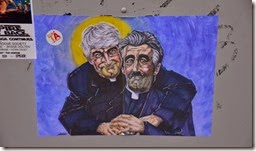 Just outside the George’s Arcade I came across this weird contribution from MP Maggle. 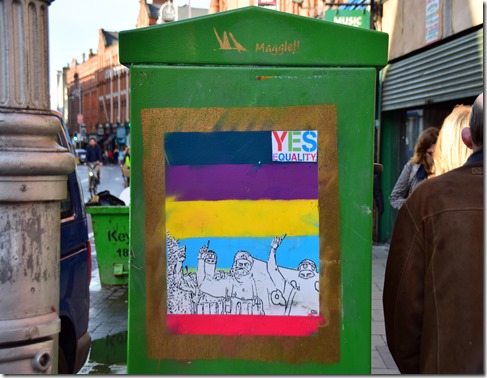 Wrestlers for Equality. Yeah I dunno either.

Posted by Joe Mansfield at 22:20 No comments:

I thought it might be interesting to make word clouds using the words from the No campaign ( taken from all 10 different posters) and the Yes campaign ( taken from 60 different posters, banners, windows and assorted street art). I’ve removed the words “Vote”, “Yes” and “No” before making the clouds but it is quite clear which is which. It’s also fairly clear who is actually talking about the actual topic ( Marriage Equality Referendum, the clue is in the name ). 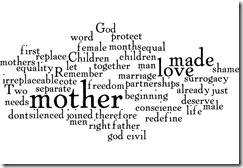 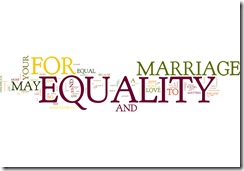 I went on another wander around the city centre looking for businesses with signs up that I hadn’t seen yet or any new posters. The No side have blanketed the city with the “Dads can be parents” posters but otherwise no new varieties on that side.

Make up For Ever on Coppinger Street demonstrating that they are quite seriously keen for a Yes result. Lolly and Cooks on Westland Row probably get the prize for the closest “Business for Yes” window to Dáil Éireann.

This one is not really a Yes vote but I like they way this works to counter a huge chunk of the negative No stuff by holding a very positive event for all types of family. Love their inclusive iconography. These Yes! Equality posters backed by the Children’s Charities have also started to appear today.

This very inclusive poster was on the door to Mezza Falafel on Parliament Street. BelongTo , the LGBT Youth organisation are upstairs. Havana Tapas Bar on South Great George’s Street have a small but unique poster of their own.

I wandered through Trinity and this was the only indication on the campus that I could see that made reference to the Referendum. I assume they have rules. 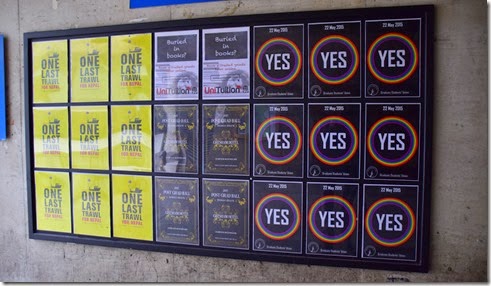 And finally this lovely hand written version of the last 8 words from Ulysses. The closing line that Joyce gave to Molly Bloom serves as a perfect call to arms for the Yes side. 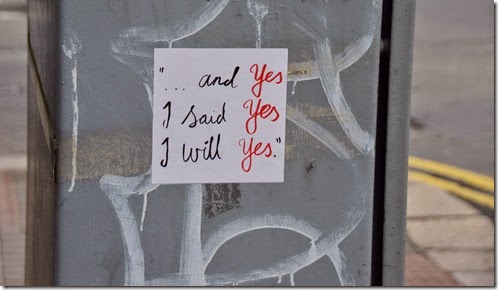 Posted by Joe Mansfield at 20:10 No comments: