Sauntering out to Sallins (and back)

My on-going search for effective walking boots has hopefully ended, for now at least. Michael Sullivan’s sales efforts on behalf of Merrell convinced me and I found a pair of Merrell Moab Mid boots and blew some of the toy budget on them.

Then I immediately took them for a forced march out the canal from home to Sallins and back. The walk is about 13.5km each way, so it was a 27km test. It’s not quite enough to be certain but I did the return leg relatively fast for me, ~6 km/h.  That was a decent 2 hour stretch at enough speed to exacerbate any blistering or pinching, and should have been enough to expose all but the most subtle of problems. The good news is there were no issues, and my feet definitely felt better at the end of the trip than they have on any others recently. I also covered the 27km in about 5 hours 45minutes, including a 30 minute rest (pint!) which makes me feel an awful lot better about planning routes with 30-35km daily stages.

I started from home again as the canal at Hazelhatch is only about 1.5km from the house. There are a lot of boats docked more or less permanently on both sides of the canal here, and on both sides of the bridge. I’m pretty sure many of them are permanent homes at this point in time. Some of them are pretty grim but quite a few are really nicely decorated like this one. As I was coming back I saw a heron catch a perch, well I think it was a perch, which was quite impressive. Didn’t have the camera ready for that unfortunately. 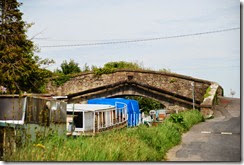 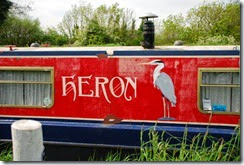 Heading out west the track almost immediately changes to a gravel base that is pretty well maintained and is alright as a walking surface. This first shot is a look back from about half way along this initial section. Slightly further along, roughly a kilometre west of Hazelhatch, is Aylmer’s Bridge on the Lyons Road, or at least on the road that is the main access to Lyons Estate & The Village at Lyons and The Mill Restaurants. 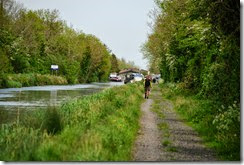 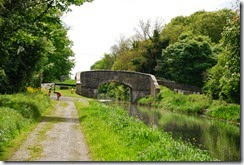 The 13th lock at Lyons estate, with the Mill restaurant tucked away on the left comes up about another km or so further west. It’s a very pleasant 20-30 minute walk out from Hazelhatch. The lock area has been very nicely restored here and the tow path changes over to a very nice pavement / cycle path surface for a few hundred metres. 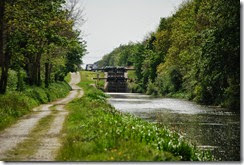 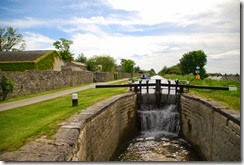 The Dublin / Kildare border crosses the canal at this point just as the cycle path surface changes over to a fully tarred road. The roadway continues on for about 500m leading up to Henry’s Bridge that carries traffic between Ardclough village and Kill. Immediately after the bridge the tow path becomes a proper public road for the next few km. There’s a distinct possibility of getting run over if you’re not paying attention which is something I need to pay attention to in future. There were about a half dozen houses right on the canal on this stretch, it’s a really lovely area and most of the houses were seriously not for the working classes. Clearly the swans like it too. That pump must have never had to really work, it’s about 1m above the canal water level, so it’s no wonder it’s still in such good nick. 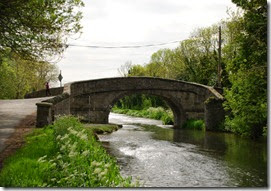 The paved roadway runs for 2km or so up to Ponsonby Bridge that carries the road between Kill and Straffan. After that the tow path reverts to gravel again for a few hundred metres but it then changes to a pretty well maintained grassy path way. 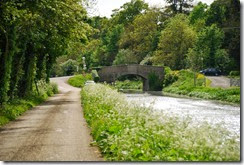 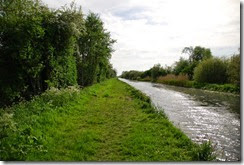 This section is really quiet and rural, getting back to the sort of terrain I’d seen around Mullauns on the way into town on the canal a few weeks ago. There’s some interesting, albeit almost invisible, engineering on this part as the canal crosses the Painestown River. You can’t miss the crossing point as it is fairly noisy but it’s not obviously an aqueduct as you walk over it, more of a culvert I suppose. After about two kilometres section ends at the Devonshire bridge. This bridge also marks one end of the Killeen golf course and carries the road that connects Kill to Bodenstown and Clane. Immediately after this is the 14th lock, which you can see peaking through under the bridge. . 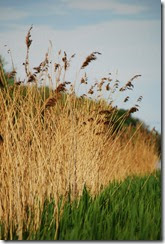 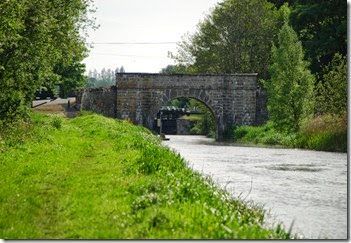 Looking back at this point you can get an idea of how rural it is from these two shots. The second picture is a full throw zoom where you can just pick out the Ponsonby Bridge two km back east. 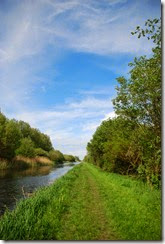 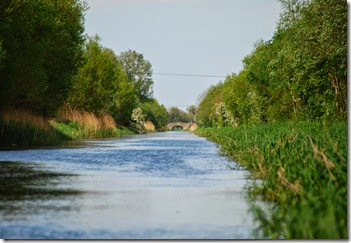 The 14th lock is about 100 metres past the bridge and it’s pretty clear that Waterways Ireland have done some work here recently. There’s a very interesting inlet to the canal between the bridge and the lock, it looks a bit like a mill race or something similar runs parallel to the canal for a couple of hundred metres between the higher section above the lock and this point. On the left for the next km or two is Killeen Golf Course and along with it comes the fairly regular sound of small balls being whacked about the fields. It’s a nicely kept course though, with some lovely chestnut trees. 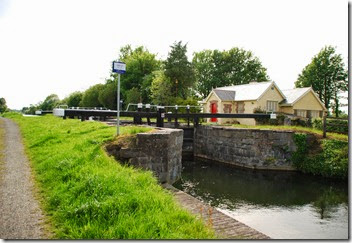 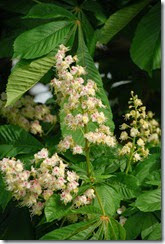 The other end of Killeen Golf Course roughly coincides with the 15th Lock and a very large dock area. There’s a complex overflow here on the south bank that seems to feed back into the Morell river but I’m not sure how because the river itself passes south to north and there is also a sluice controlled in-flow feed from the same river along this section. And buried under here is some aqueduct engineering again to let the Morrell flow under the canal. 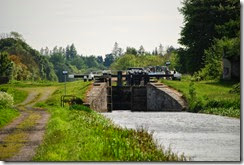 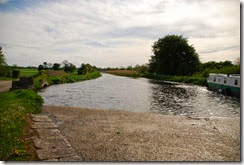 There’s another stretch of pretty rural canal way here for about a kilometre at which point the Naas Golf Club starts to make itself known on the left just as the canal takes a hard right turn on the approach into Sallins. I got to see the only boat actually moving along this section and also found some evidence that an egg loving carnivore had been at work plundering some nearby nest. 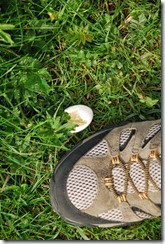 A couple of hundred metres later the canal is crossed by the main Dublin to Cork train line. Like many rail bridges this one appears to be nameless (the Sallins Local Area Plan just calls it “Railway Bridge”). Oh well. The track starts to degrade noticeably in a few spots here, mostly as a result of cyclists I think. It’s not any inconvenience at all for a walker, and there are only a few spots in a short wooded section here that are bad, but I think that the cyclists might be a lot happier if this area got upgraded sometime soon. It is worth noting that this is the first spot on the canal walk that I’ve come across that is in any way “damaged” between the starting point way back in Grand Canal Square which is pretty good going I think. 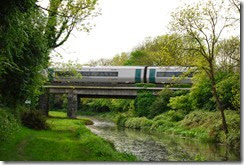 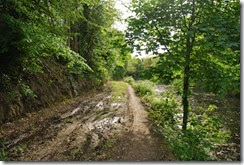 From there into Sallins it’s about 500m so there’s no real problem navigating these few muddy patches. Sallins has a pretty large dock just after the bridge which appears to just go by the rather anonymous name of “Canal Bridge”. Clearly naming bridges was never on the agenda for anyone in Sallins. 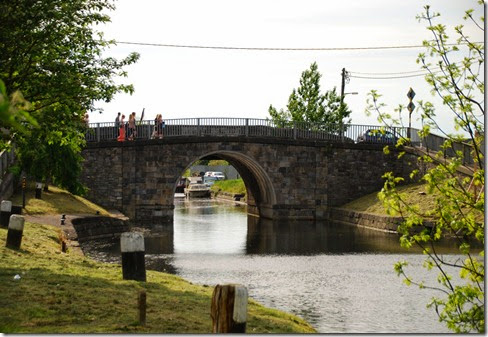 I took a pit stop here, or rather a pint stop, in a very nice gastro pub called, oddly enough, the “13th Lock” for about thirty minutes. I’d been taking quite a few photographs along the way out so I’d taken about three and a quarter hours to get here from home.

Heading back I wanted to make sure I was testing the shoes so I packed the camera away and was aiming for around 6km/h. I made it back to Hazelhatch in just over two hours so the pace was there or thereabouts and as I said at the start my feet were fine so I’m pretty hopeful that I’ve got the beginnings of a viable plan for crossing the country.

Not a bad afternoon’s walking at all.

Posted by Joe Mansfield at 01:17 No comments:

I was over in Ardmore earlier today, checking out the Cliff walk, which is a lovely 5km loop around the headland that I’d strongly recommend to anyone looking for a nice mix of walking, scenery and some nature and it’s all pretty easy going and well sign posted. Well it’s well signposted if you go around the “wrong way”. The maps say start at the Round Tower and loop anti-clockwise but most people start at the Cliff House Hotel and loop clockwise. If you do start at the Round Tower the first couple of way markers are a bit hard to find, they are there but are buried in the bushes somewhat. On the clockwise route you can’t get lost – there is only one route to take. 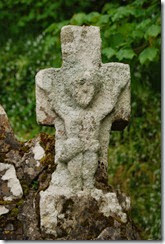 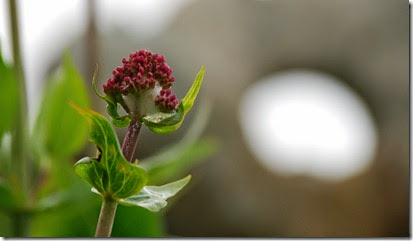 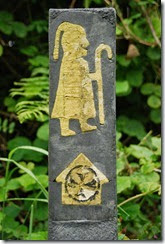 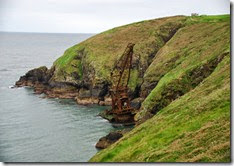 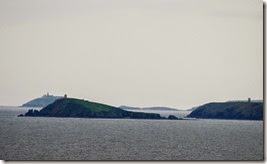 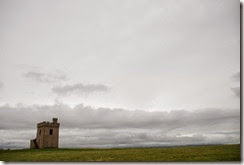 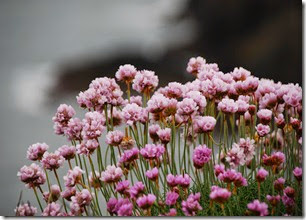 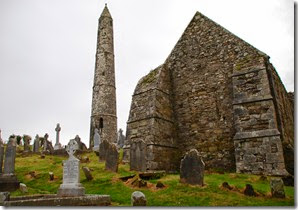 The walk was fun but I got a real treat when I got back into the village. Just as I got to the main cross roads I noticed a bunch of vintage cars. I’d seen them leaving Helvick earlier but I was too late to grab a camera and find a good spot to set up. Not this time, I was in an almost perfect spot to catch them. It turns out that it is the Irish Model T Ford Club so all of these are T’s of one variant or another.

Posted by Joe Mansfield at 21:00 No comments: